Create an Account - Increase your productivity, customize your experience, and engage in information you care about.

Any time of year, Surry is a great place to visit!

Surry County, located on the James River in Virginia, has both an interesting past and an exciting future. Before the first English settlers sailed up the James in 1607, the county was home to Native Americans. With the coming of the English, who first landed in Surry County before building their fort on Jamestown Island, Surry was considered part of the Jamestown Settlement. In 1652 Surry County separated from James City County and extended south as far as North Carolina. Surry is home to several century-old places of historic note, including:

The Surry County of today looks back with pride and cherishes its history and rural nature; but at the same time the county is excited to offer opportunities for economic development and business growth.

Dominion Power has operated the Surry Nuclear Power Station in Surry County since 1972 and is one of the County's largest employers. Visitors to the County are encouraged to tour the Surry Nuclear Information Center to learn more about electrical generation and see how a nuclear power station works.

Plan to stop by the Surry County Visitors Center, where friendly staff will help customize your trip to include all the fun adventures that are available on a daily basis. 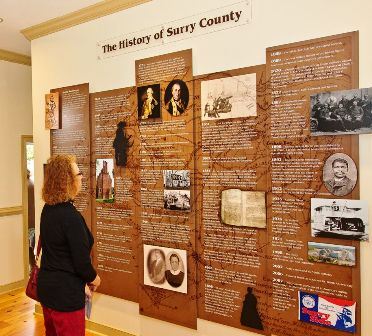 For more information about tourism initiatives in Surry County, contact: